The Banjo Special is a yearly event that has become an institution in the roots music community of Toronto, Ontario. This year, as we mark the 21st anniversary, we go online and invite the whole banjo world to join in on the fun.
Tune in on youtube Thursday March 11 at 7:30 p.m. EST when this video link becomes public: https://youtu.be/91pdQRGhr88
If you can't tune in at that time, don't worry. It's not livestreamed but a recorded video you can watch anytime after it goes public.
We request an admission donation or tip $15.00 is suggested or whatever you can afford. Donation admission tip to https://paypal.me/ArnieNaiman?locale.x=en_US and we thank you very much!
We have been doing concerts at The Tranzac Club in Toronto the past few years and it's a venue worthy of support for providing performance spaces for many independent musicians. A portion of the donations will go towards supporting the venue.
The Banjo Special brings together 4 of Canada’s top players to celebrate this wonderful instrument. Come and join Chris Coole, Arnie Naiman, Brian Taheny, and Chris Quinn, and our special guests, as we present an evening of songs and tunes with banjos at the heart of it all. There may be; breakdowns and marches, picks and bare fingers, songs new and old, tenors, Tubaphones, gourds, flatheads, Vegas and Gibsons. And, it will all be handled with flair, fun, and big style.
Meet the banjo pickers.
Arnie Naiman is a unique banjo player for his claw-hammer and fingerpicking styles. He was influenced by folk music of the 60’s and 70’s as well as by the music of pre-war artists such as Uncle Dave Macon, Charlie Poole, and The Carter Family to name only a few: Arnie is a very fine interpreter of these old songs and tunes. Arnie’s own banjo compositions are various; some joyous and celebratory, others haunting and dark. Arnie performs solo and with Hannah Shira Naiman, Ragged But Right, and also in the Virginia based old-time String Band, Albemarle Ramblers. Arnie's recent solo banjo CD, is entitled My Lucky Stars. https://arnienaiman.com/
String Guru Brian Taheny hails from the Irish music mecca of Sligo, Ireland.Brian plays Fiddle, Tenor Banjo, Guitar, Irish Bouzouki, Cittern, Mandolin, Mandola, Mandocello, Dobro and Bass guitar, and is also known for his innovative arrangements of traditional tunes. Brian has built a solid reputation for himself as an extremely accomplished Celtic musician with strong and uniquely distinctive style. He has performed with many of the greats in traditional music all over Europe, Canada, America, and Asia. He has performed on well over 100 albums, has received two Juno nominations and is currently part of the well respected trio "North Atlantic Drift" based out of Toronto
https://m.facebook.com/northatlanticdrifttoronto/
, http://www.northatlanticdrift.org
Across Canada and the United States, Chris Coole has become as much of a household name on the claw-hammer banjo as one can become. As a teacher, composer, and performer; he has plied his trade professionally for more than 30 years. Apart from his own albums, Chris can be heard as a sideman and/or producer on over 150 recordings by artists such as Sylvia Tyson, Jim Cuddy, Natalie MacMaster, Cara Luft, John Reishman, April Verch, Justin Rutledge, The Slocan Ramblers, and David Francey. Chris Currently plays with The Lonesome Ace Stringband.
https://chriscoole.com/
Chris Quinn began his Scruggs style bluegrass odyssey in 1979. Having performed on over 100 CDs as a sideman or featured artist, Quinn is a central figure on the bluegrass scene in Canada and abroad. Chris has become renowned for his solid timing, his sense of taste and tone, and his creative back-up playing. A sought after teacher, Chris has taught hundreds of people at camps and workshops; from Quebec to Tennessee, from BC to Asia. As younger players have come along to join the professional scene, Chris has been a mentor to many of them. Today, some of Chris’ former students have gone on to professional careers in music too. Chris Quinn https://chris-quinn.ca/ and
https://www.facebook.com/banjoquinn
​
New! See our new Fingerplay VIDEOS
Visit the NEW Tickles & Tunes YOUTUBE CHANNEL

It's a Beautiful Day / C’est une belle Journée
a French/English cd for children! 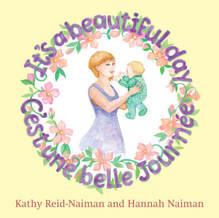 by Kathy Reid-Naiman and Hannah Naiman
This beautiful CD is perfect for young children whose parents speak either English or French. There are songs, fingerplays, dances, and lullabies in both languages
M1701-----UPC 844667040173-
Congratulations to Hannah Shira Naiman - Winner of the 2017 Canadian Folk Music Award (CFMA) traditional Singer of the Year! 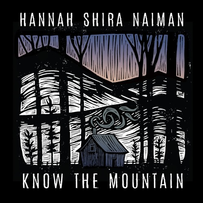 ​ Hannah Shira Naiman charms the listener with an even more bold, layered, and mature set of tunes.
The record crosses from sweet waltzes about fishes and birds to dark murder ballads and haunting instrumental reels. Naiman intensely studied fiddle -- a new instrument to her -- near the mountains of Virginia and West Virginia between records, and shares the result of her latest inspiration in two original fiddle tunes.Also contributing to Know The Mountain is guitar and banjo from Arnie Naiman, percussion from Gary Craig (Bruce Cockburn, Blackie and the Rodeo Kings) and bass from Brian Kobayakawa (Creaking Tree String Quartet). Emily Adam (Blackest Crow) joins with harmony vocals. Don Kerr (Ron Sexsmith, Rheostatics) produced the album.

My Lucky Stars by Arnie Naiman 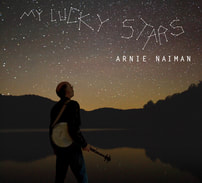 "He loves clawhammer banjo, it’s tone, the tunes, the lilt, and it shows.  He wants to share it. And he does, quietly, carefully, and as comfortably as an old shoe. This is a beautiful, thoughtful, glorious collection of tunes that we can get lost in precisely because Naiman does. Love it, love it, love it."   Glen Herbert , Penguin Eggs Magazine

“My Lucky Stars” is an impressive album, and it will surely be one of the top old time albums of the year. And unlike many other albums in the genre, you don’t have to be a musician to fully appreciate it. The album is available as a traditional CD, or as a digital download (which includes the cover art and liner notes)." BANJO NEWSLETTER  October 2016 Review by John Walkenbach

We are pleased to offer the Maple Ridge model of open back 5 string banjos for sale at retail prices.
These banjos are made by Rickard Banjos right here at Bill Rickard's shop in Aurora, Ontario. Every banjo is crafted to high standards of quality-  an excellent  instrument for life with a  simply perfect design, beautiful tone and playability suitable for both the professional or casual player. This model is especially suited for players of old time music.