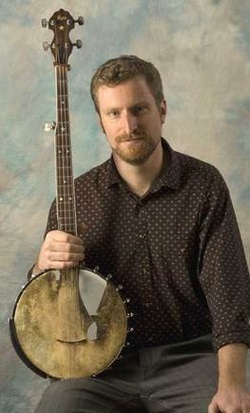 I can't quite explain it. All I remember is getting a banjo for Christmas when I was seventeen. The next thing I know, I'm going on thirty something and somehow have managed to do nothing but play music ever since. When I first met Arnie he played me a tune called Banjo Tramp. When I asked, What's a banjo tramp? he said, You!

So what Happened In between?

Lot's of good stuff. Playing in kitchens, bars, subways, sidewalks, stairwells, campsites, folk clubs, festivals, coffee shops, front porches, back porches, markets, bed, boats, cars and what not. I met all these new people, some of which were just like me and others that couldn't have seemed more different. Music was the common ground and they became my second family. The whole time I was wandering around Toronto with headphones in my ears, I became acquainted with a world of musicians most of whom I'll probably never meet but nevertheless seem like old friends.

Like a lot of other people who have come to this music from far away both in the sense of distance and time, I've spent a lot of hours wondering why it just seems to feel right. All I can figure is that good music has no age and doesn't know anything about distance. I can also confidently say that a banjo, played right, is one of the most beautiful sounds I've ever heard, (especially if Kyle Creed is the guy playing it). Now here's something I just want you read. To me, it sums it all up better than I ever could.

"I think these musicians- I do it myself, each one is expressing his past, his present, what he should have been , and what he hopes to be. And he's expressing all of his sorrows, all of his happiness. If you study him close enough you can almost read his life. And I think when they're playing good, clean, honest music banjo picking, guitar playing, fiddling, I think you're just as close to heaven as you'll ever be."
Wilson Douglas- West Virginia Fiddler 1922-1999

Chris Coole was first attracted to the sounds of old-time and bluegrass music as a teenager growing up in Toronto, Ontario. At seventeen years old, he got his first banjo, and soon discovered the clawhammer style. Before long his love of playing traditional country music left little time for anything else and as a result led him to pursue a career as a full time musician, a road that he has happily traveled ever since.
Over the years Chris has split his time between playing bluegrass and old-time music and has allowed each to inspire the other to the point where it is now difficult to say where one ends and the other begins. This may be attributed to a. strong belief that country music is country music, be it Tommy Jarrell, Bill Monroe or George Jones. “I’ve always believed that the essence of music is in the individual, not in the category or style of music they play”.

Chris’ unique style of clawhammer banjo playing began to reach a wider audience with the release of his first C.D.- “Five Strings Attached With No Backing” in 1997 and later, “Five Strings Attached Vol~2" in 2000. Both albums were collaborations with long time musical partner, and fellow Torontonian, Arnie Naiman. The combination of sparse, well played arrangements of traditional tunes, as well as creative originals struck a chord with clawhammer banjo fans worldwide. In the words of one reviewer, ”Chris Coole plays some of the cleanest, most melodically fluid and inspiring clawhammer one could hear.” (The Banjo Newsletter, 2003). Apart from his own recordings he can also be heard as a sideman on over thirty CDs by Canadian artists such as Sylvia Tyson, Ron Hynes, Jenny Whitely and April Verch.

Chris divides his time between playing guitar and singing in two bluegrass bands – Crazy Strings, The Foggy Hogtown Boys. He has performed Southern old-time music in a duo with fiddler, Erynn Marshall. He also performs and has recorded albums with Ivan Rosenberg.