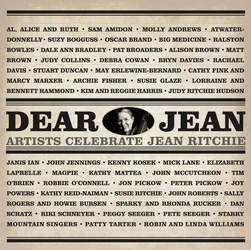 Purchase CD
C: $15.00
The 37 track, 2-CD set features performances from an impressive array of Ritchie’s fans and admirers, all of whom have come together to honor the living legacy of the Kentucky-born singer/songwriter many refer to as "The Mother of Folk." Contributors were intentionally selected to represent the diversity of genres and generations Ritchie has influenced throughout her life, with classic artists like Pete Seeger, Judy Collins, Janis Ian, Kathy Mattea, Tim O’Brien, Robin and Linda Williams, Oscar Brand, and Dale Ann Bradley sharing the spotlight with up and coming talents like the Starry Mountain Singers, Rachael Davis, and Matt Brown. Standout tracks include “The L&N Don’t Stop Here Anymore” (Robin and Linda Williams), “I’ve Got a Mother” (The Starry Mountain Singers), “Black Waters” (John McCutcheon, Kathy Mattea, Suzy Bogguss, Tim O’Brien), “Morning Come, Maria’s Gone” (Janis Ian) and  “One I Love” (Judy Collins). There is also a spoken word version of “I Celebrate Life” from Pete Seeger, one of his last recordings followed by a wonderful version of Pretty Betty Martin played by Kathy Reid-Naiman.

Jean Ritchie was born in 1922 in Viper, Kentucky, the youngest of 14 children. Ritchie grew up immersed in the traditional songs of the region and moved to New York in the 1940s where, as a social worker, she taught music to children. She also befriended Pete Seeger, Oscar Brand, Woody Guthrie and Alan Lomax during this time and, in the 1950s, recorded several albums for Elektra. In the early ’50s she received a Fulbright scholarship and traveled to the UK and Ireland to collect traditional songs. Ritchie’s songs have been recorded by a variety of artists including Linda Ronstadt, Emmylou Harris, Johnny Cashand Judy Collins. Over the course of her career, her song collecting and song writing has helped to preserve the musical legacy of her Kentucky home, as well as expand awareness of its challenges through her continued support of the grassroots environmental organization Appalachian Voices and politically pointed songs such as “The L&N” and “Black Waters.” Not only is Jean Ritchie an amazing musician, cultural preserver, and activist, she is and has always been a welcoming, supporting mentor for all those who have crossed her path, and Dear Jean gives a well-deserved thank you for years of inspiration.

“As the ‘Mother of Folk,’ Jean is a living museum of impeccably rendered songs passed down from singer to singer, influencing and inspiring generations.” —Joan Baez

“When I grow up I want to write just like Jean Ritchie. Seriously, I love every song she’s ever written. I love her simple yet beautiful melodies and the honest, heartfelt truth in them.” —Dolly Parton